I introduced this game this week and in just two days it has become a new favorite.  This game has also been called The Game of Pig.  As I was teaching my kids how to play I told them it was kind of like Snake but like Baby Snake and from there on the name stuck.
Baby Snake is an adaptation of the whole class game SNAKE.  You can use this game for your math game station.  If works well with small groups or partners.

Materials:
2 dice
Whiteboard Marker and Baby Snake Game Template
Students can also use a piece of paper or whiteboard to write down totals. 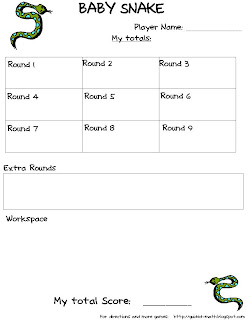 Object:
Be the first person to reach 100 points or more.

1.  Each student takes a turn rolling the dice.  Player 1 may roll the dice as many times as he or she wants, mentally keeping a running total of the sums.

Players decide when they want to stop rolling the dice.  When the player stops rolling, he or she records the total and adds it to the score from previous rounds.

2.  BUT... if a 1 comes up on one of the dice before the player stops rolling, the player will score a 0 for that round and play continues to the next player.

3.  BUT... if two 1's come up, (snake eyes), the player loses ALL their points they have accumulated so far, they wipe out all their points to 0!

4.  Players keep on taking turns.  The first player to reach 100 or more wins the game.
Mary Mueller at 7:42 PM
Share