I have another game for you tonight!  This is a traditional dice game that comes from France many many years ago.  You can buy the Shut the Box game boxes in stores but I have created a sheet that mimics and serves the same purpose.... for free.

This game can help reinforce addition, multiplication and mental math skills.  Laminate the playing pages or put them in sheet protectors for repeated use. 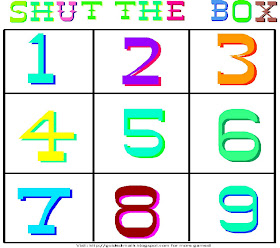 Number of Players: 2 or more
Materials: 2 dice, Shut the Box Sheet, nine or 12 counters
Goal:  To achieve the lowest score
Skill:  Addition for the 9 box game, Multiplication and Addition for the 12 box game
How to Play:
1.  Players roll the dice to decide who goes first (highest score)
2.  Player 1 rolls the dice and adds them together.  The player places counters on any boxes which add up to that total. They choose one combination of their choice.
For example:  rolling a 5 and 3 (5 +3 = 8)
Player one can cover any one of the following combinations:
8
7+1
6+2
5+3
1+2+5
1+3+4
Usually a player will try to cover the higher numbers (7, 8, 9) first.
3.  Player One then throws both dice again and tries cover any remaining boxes with the new total. The combination must add up to the total on the dice.
4.  Player One continues until they cover any boxes using combinations which add to the total thrown. At this point, Player One finishes their turn with a score equal to the total of the uncovered boxes.  Numbers 1, 4, and 3 are left then the player total would be 8 points for the round. If she has covered every number (a score of zero), she has "Shut the Box".
5. All the counters are then removed. Play continues in a clockwise direction until every player has had a turn. The player with the lowest score wins that round.
The game can be played for any number of rounds or for a certain time limit. The overall winner is the player with the lowest total score over all the rounds.
Variations:  The 9 box game is used for addition.  The 12 box game can be used for multiplication and addition.  If you rolled a 5 and 4, 5x4=20.  A player could place a counter on the 12 and 8 which equals 20.
Enjoy!