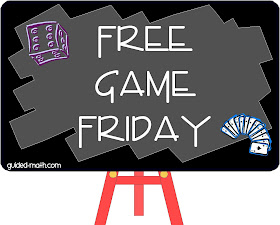 Hope everyone is getting along with being back in the swing of things! Pssst...  It's a long weekend!!  This long weekend comes just at the right time!

I have a collection of free math addition games for you today! 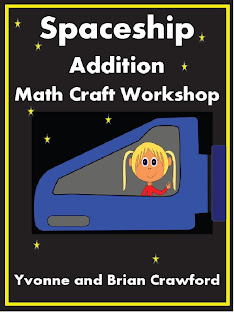 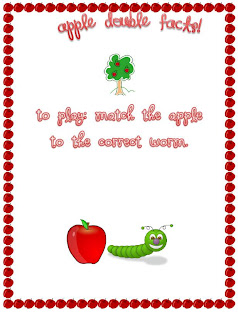 The Hardest Transition of All

I wrote this blog post a couple years ago on my original blog and thought I would rerun it.  I don't think I can say these words better than I did two years ago...they still hold true... Enjoy!


The Hardest Transition of All
Transition is a word we hear often in the world of education.  How we get students from one subject to the next, how we get them to calm down after lunch, getting them back to the lesson after they have discovered that it is raining outside, going from the bathroom to the classroom... and so on and so forth.
What about us teachers?  The hardest transition of all is going back to work after two and a half months off.  Don't get me wrong here.  I am very, very grateful to be in a profession where I can recharge my batteries for an extended amount of time.  It seems the older I get the harder that transition gets.  Getting up, getting ready, getting to school... just being awake, full of energy and spirit, being on our feet most of the day and don't forget those burning thighs after doing a thousand squats to get down to the student desk level.  Here are a few other transition favorites...
1.  getting legs and thigh skin accustomed to bumping into the corner of desks and chairs again, can we say, "Hello bruises!",
2.  the noise level
3.  responding to my last name or teacher (one thousand times a day)
4.  training my bladder to hold it for hours on end
5.  The Hungry Horrors...I always forget how hungry and thirsty I am the first days.
I realize this transition takes time.  I know that in a week or two that I will get back into the swing of things and feel like my "normal" teacher self.
I hope everyone is off to a great start this school year and I hope it continues to be great!﻿
Mary Mueller at 7:06 AM 5 comments:
Share

Happy Friday Everyone!  I just survived my first week back at school!  Phew!  It was a great but always hectic and tiring week!  I am excited for this upcoming school year and getting to know my great class!

Our free game today was created by Stephanie, Teaching in Room 6.  This free bingo game focuses on decimals and percents.  Students play in normal bingo fashion but have to cover up the equivalent decimal or fraction.  Makes them think... imagine that! 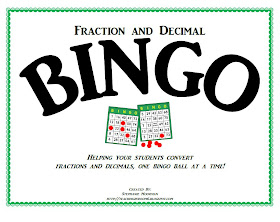 Today is my day for the Back to School Blog Hop!  I think this day was perfectly planned because today is the first day of school! 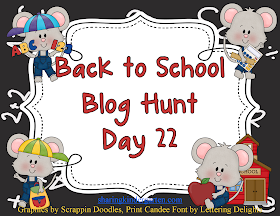 I am writing this post a couple days ahead... So I thought I would write down my wish list of what I hope is going to happen on the first day of school.

4.  I wake up without a headache, seems like my head always knows when it's the first day of school.
(ask me about the year that I lost power in the middle of the night and all the fire alarms took turns beeping on one minute intervals the WHOLE night)

5.  That this year will be the best ever!

With all that being said... I have a new freebie for you today!  I created a new math poster set featuring... Mean, Median, Mode, Average, Range and a bonus song! 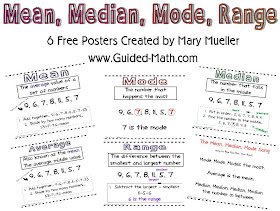 I hope that everyone has enjoyed this blog hop!
Be sure to check out all the other fabulous blogs that are participating in this hop.

My blog design had a slight meltdown today or it could have been yesterday.  I've had to switch it over to a temporary background, not my style but will do for now (it's all about the content anyway, right?

I think my website is sending me a message... time to hire a blog designer to give Guided-Math a new makeover!  So stay tuned...
Mary Mueller at 7:30 PM 2 comments:
Share

Made it Monday - Bottle Cap Math

It seems like I drank water all summer.  Let me rephrase... it took me ALL summer to drink enough water to collect enough bottle caps to create this math game. :)

I found this idea originally on pinterest and thought, "Hey I can do that one!  What a great way to recycle all those water bottle caps."  I didn't realize how many bottle caps one would need to create this game.  Even after making this game, I still have bottle caps randomly laying around the house, as I always made sure to take the cap off when I was done. 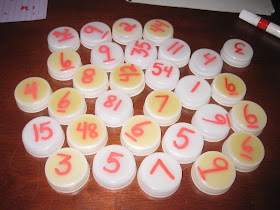 Here is my large version.  Some of the caps are orange because that was the flavor of that water, it apparently stains the cap. I figured they still work just fine, orange color and all. 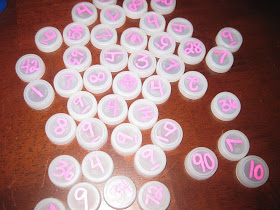 ...and here are the small caps.

I used regular paint pens to write the numbers on top of the caps.
The numbers are bright and bold this way.
I also made sure to wash and dry the bottle caps before I put the numbers on them.

I decided to use random math facts for each set.  Each set is complete, meaning there will be no leftover caps once students create their number sentences.  I also opted not to use the multiplication and equal signs. (That would of taken another whole case of water here).

I'm thinking that students can use these games as independent games or as partner games.  For the partner game students can time each other to see how fast they can put together all the number sentences.  I'll see how this game plays out once students get their hands on it this school year.

I'm also going to ask students to save their bottle caps too.  I would like to make a set for each of the multiplication families, but that is going to take a whole lot of drinking!

It's FRIDAY!  Only three more sleeps until I begin my first week of school.  Teachers start Monday, students start Wednesday.  I'm ready as I'll ever be... I think?!?

I'm passing along these free math games from Tessa, Tales from Outside the Classroom, today!  Tessa has a great variety of math games... 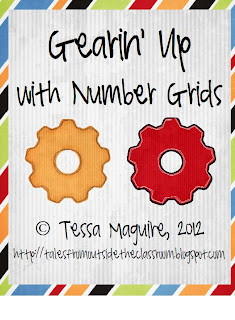 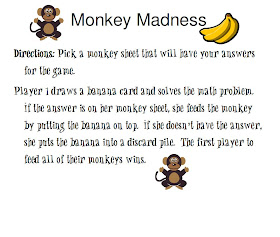 I have three more days of summer break!  Teachers officially start on Monday and the kids show up on Wednesday.  My room is mostly ready (pics to come), copies for the first days are made, class list is almost complete, me.... I'm getting there!

I have a card game for you today.  I came across this one on the www and thought it would make a great addition to our list of math card games for our game station.  I created a direction page and recording sheet to go along with the game.

2.  The remaining cards are put in a pile in the middle, flip the top card over.

The target number is 40.

4.  Players go through their stack of 10 cards.  The objective is to find two cards that when multiplied together, the product is in the 40 range (40-49).

5.  Players that can make a product in the required number range can then remove those two cards from their pile.

6.  Play continues this way until one player is out of cards.

I created a recording sheet for this game.  You can have each player fill their own out or have each group fill out one page.  There are five columns.  The first is to record down the zone number.  Each player (up to 4) has a space to record down their product that fits in that zone.  If a player can not create a zone product, they get a NO.

Here is an example of what game play and recording would look like... 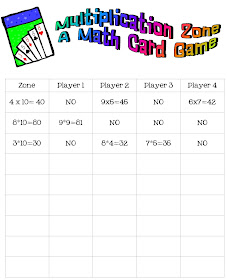 Have you ever played Jenga, you know the game where you stack the block and then try to take them out without having the tower fall over?  How about utilizing this game for your classroom, however adding math facts to the blocks?  As students pull out the block, they have to solve the fact.  This fun and clever free game printable comes from Rachel Lynette of Minds in Bloom. Check it out!

Good Morning!  I hope everyone is having a great weekend.  I know a lot of you are preparing to go back to school very soon, (some start tomorrow! YIKES!)  I thankfully have two more weeks before my first day back.  Although, I started getting back into my classroom to set-up and get my mind in gear!  So good luck to all of you starting back.  I hope your school year is the best yet!

I found a fabulous freebie for you and well if you know me... I love to share freebies! 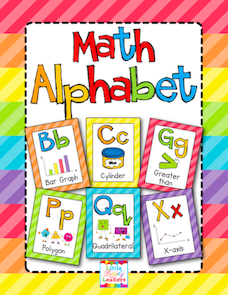 How cute are these??  Bridget from Little Lovely Leaders created a set of math alphabet posters... and they are FREE!!!  Head on over to her blog to get your free posters!

Cootie Catchers for math!?!  This free download features integers in a fun, interactive way.  Be sure to head over to Andrea's blog, For the Love of Teaching Math, to download your free integer cootie catcher!